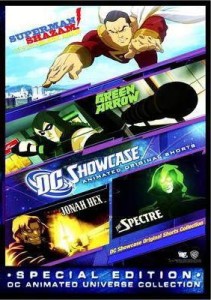 The guys and gals over at DC Universe have made a quite a few good animated films, so when I saw Superman and Shazam: The Return of Black Adam on Netflix I decided to give it a watch.  It turns out that it was actually a collection of DC shorts called the DC Showcase Original Shorts Collection.  It was a cool way to see a few characters that don’t get a lot of coverage.

On Netflix there were four shorts: Superman and Shazam: The Return of Black Adam, The Spectre, Jonah Hex, and The Green Arrow.  If you check this out on DVD/Blu-Ray there is also a short Catwoman feature, but since I didn’t see it, I can’t review it.

Superman and Shazam: The Return of Black Adam is the longest of the shorts clocking in at twenty-five minutes.  It features the origin of the new Captain Marvel (different from Marvel’s Captain Marvel, yes it is very confusing) as he enlists Superman’s help to take out Black Adam.

The Spectre is different from most of the DCU stuff because they set it in the 70’s, and it follows The Spectre as he terrorizes the people that killed a movie mogul.  The Spectre unlike most DC Heroes has no problem killing guilty people.

Jonah Hex rides in to town to find a bounty, but it turns out he will have to take out a gang that has been killing rich people and stealing their money.

The Green Arrow is planning a special night with Dinah Lance/Black Canary when Merlyn the Magnificent shows up to kill the Princess of Perdita, so it is time for a Green Arrow versus Black Arrow shoot off.

All of the shorts are well done, and like I said before it is fun to check out some of the lesser DC Heroes.  You almost never hear about The Spectre, and after the awful Jonah Hex movie is great to see him in something good.  It is also nice to see a more true to the comic book Green Arrow over what is presented by the TV show.  Marvel’s Captain Marvel is better, but DC’s is still good, and I was happy to see him.

DCU continues to pump out great animated flicks, and I stand by my assertion that they should be heading up DC/Warner Brothers live action super hero movies because everything that I have watched that they have done has at least been interesting.  But I guess we will see how the new Batman versus Superman movie turns out before I get too judgmental.  Maybe.

4 Replies to “Spending Some Time With The DC Showcase Original Shorts Collection!”