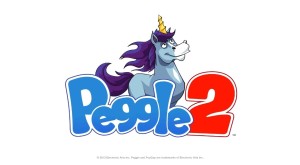 There are not a lot of games my wife and I agree on, but Peggle was one of them, so when PopCap/EA released Peggle 2 for Xbox One yesterday it was a must purchase.  Peggle 2 is mostly just a prettier version of Peggle with different characters, but that is like saying “meh it is just tastier chocolate”.  Peggle, like cowbell, is something that you cannot have too much of.

For those of you that did not play Peggle, I would like to welcome you to the end of 2013, and ask what rock you have been hiding under for the last decade?  Peggle is an awesome mix of plinko and pin ball with a crazy cast of characters that give you special abilities to destroy all those orange pegs.  In Peggle 2 you do the same thing, but there are new characters, and each level has special optional extra challenges to add to the replayability.  Plus each character has their own set of trials that test your skills in doing crazy ball shots.  There are also character costumes to unlock.

Despite being a 2D puzzle game, they still updated the graphics quite a bit.  The special abilities have really cool particle effects, and the characters are much more animated on the side lines.  The backgrounds are much more intricate.  While this game is still about the fun gameplay, the new graphics do make the game more enjoyable.

Some people are complaining that there are only five characters, and six worlds to explore, but there are still 160 puzzles to play, which is much more than the original.  That is still a lot of bang for $12 bucks, and this game is impossible to play without a smile on your face.

One of the big reasons for the smile is the music.  In Peggle it was all about hearing the Ode to Joy play at the end of every level, but in Peggle 2 each character has its own Fever music, from Ode to Joy to the William Tell Overture, and they all sound great and make that last shot one of the best things to happen in all of video games.

The only downside about this game is that it ships without local multiplayer.  They just announced that it would be added in the next DLC, but its exclusion keeps Peggle 2 from being perfect.  It was one of the things my wife and I enjoyed most about the first game.

I like Peggle 2 quite a bit, and if you have an Xbox One it is more than a worthy purchase.  For me it is a must own.  If you do not have an Xbox One, I am sure, much like Peggle, it will be on just about every platform known to man soon enough.

3 Replies to “Basking in the Warm Glow of Peggle 2!”