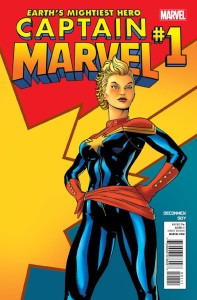 The story starts off with Captain America trying to get Ms. Marvel demoted.  Which is a joke because Carol Danvers is a Colonel in the Air Force, so becoming a ‘Captain’ would be a couple of steps down.  This prompting leads to some soul searching, and the soul searching leads to an old friend giving her an old airplane that somehow takes her to the past.  While in the World War II era she is able to rediscover who she is, and why she is the perfect Captain Marvel.

The story in this book is very well done, DeConnick did a great job of not writing an origin story, but covering enough of the past so that if you are new to the Captain Marvel franchise, you will have no problems following along.  Meanwhile she crafts a new hero to root for.

The art is well done, but it is also this volume’s greatest weakness.  They change artists towards the end of the book, and it is totally different, so it is hard to tell who is who and what is going on until you get adjusted to the new look.  It is still good art.  It is just a hard left as far as the look goes.

If you are looking for a new Avenger to root for, the new Captain Marvel is a great one to read about.  I enjoyed getting to know the other ‘Captain’ in the Avengers a little better, and I cannot wait to read the next volume in her story.