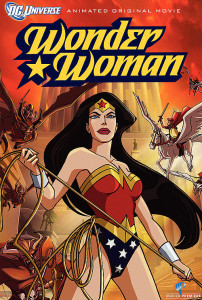 Wonder Woman is a 2009 direct to video cartoon made by the people at DC Universe and directed by Lauren Montgomery.  While it never made it to the big screen, it does show that someone at DC/Warner knows how to make a Wonder Woman movie.

The movie starts off with the Amazons at war with an army of men and mythical creatures, and the army is being led by Ares (Alfred Molina) to fuel his need for war and violence.  Queen Hippolyta (Virginia Madsen) is able to defeat Ares, but the gods do not allow her to kill him, but instead she gets to imprison him.  For all of the Amazons’ suffering they get a hidden island paradise Themyscira, and to live in peace for all eternity.  The Queen also gets a child Dianna (Keri Russell).  Their peace and tranquility is disrupted when a pilot Steve Trevor (Nathan Fillion) crash lands on the island, and Dianna starts her journey to become Wonder Woman.

While I am getting a little tired of origin stories at least Wonder Woman’s is a little different.  She is a play off Greek culture, and she is truly a super human in all respects, and I love how this movie explains everything without beating you over the head with it.  They even explain the stupid invisible jet, and use it in a cool way.

What I like is that they let Wonder Woman be Wonder Woman.  They didn’t make her some scrappy ninja type spinning and jumping around, no she gets in there and brawls with the bad guys and deals and takes a ton of punishment.  It is a credit to Lauren Montgomery to let this character be herself.

The voice actors all do a pretty good job, Nathan Filion and Alfred Molina really got in to it, and Keri Russell was good for the most part, but could be stilted at times.  The rest of the actors are hit and miss, but they do not have a ton of screen time anyway.

I liked this movie quite a bit, and it seems sad to me that Warner Bros has people in their company that understand the character, but they can’t seem to hire them to make the big screen movie they keep promising, and it is a real shame since a good female super hero would be a nice change from the pretty much all male crew we have now.

5 Replies to “So DC Does Know How To Make A Wonder Woman Movie!”