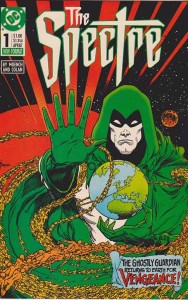 For those of you that don’t know who The Spectre is, and that should be most people,  he is a police officer by the name of Jim Corrigan who dies and then comes back with the ability to haunt and terrorize bad guys.  He would be a good fit to hang out with the supernatural focused Constantine.  If they can work Dr. Fate in there like they hinted at earlier, they would have three pretty good heroes hanging out on NBC.

Still I have to wonder if there are enough channels and enough time in the day to watch all this comic book based television?  I will have to try for all of us!  I wonder who DC will pitch for their next TV show?

3 Replies to “DC Wants Another Show? The Spectre!”