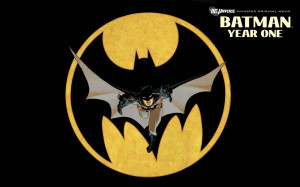 The movie starts off with Bruce Wayne flying back in to the city, and Jim Gordon starting his new job as a lieutenant for the Gotham City Police Department, and then follows how the two start fighting crime.  Bruce becomes a vigilantly, and Jim starts to deal with the corruption in the police department.  This film also chronicles the start of Selina Kyle aka Catwoman.

It is great that this movie is as much about Jim Gordon as it is Bruce Wayne because in the end he really is the one with the most to loose: wife, child, job, and the stability of the entire city, and he chooses to do right thing anyway.  Bruce on the other hand has already lost it all.  The Catwoman parts were interesting, but I think due to the restricted time of the film they could have left her out, but she is a good counter point to Batman, and what could have happened to Bruce had he grown up in the same slums that she did.

I think the actors were trying the channel the dark mood of the movie to much and kind of came off deadpan.  Proving it is hard to replace Kevin Conroy, longtime voice of Batman.

It is a good movie and DC Universe, the animation studio in charge of the DC properties, continues to put out quality films.  Someone at Warner Brothers should think about giving these guys a shot at some of the live action films