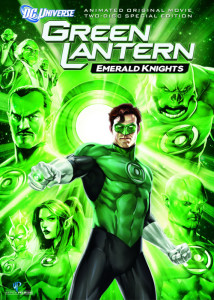 Green Lantern: Emerald Knights is an animated DC Universe movie that was released directly to video.  DCU has been making quite a name for themselves in the comic book world by releasing good well told movies.  This movie is about the Green Lantern Corps.

The movie is actually six short stories told by Hal Jordan (Nathan Fillion) to his new recruit Arisia Rrab (Elisabeth Moss) as they get ready for a battle against the massive Krona.  The stories are meant to calm her as well as give her some history about the Corps.  The stories are: The First Lantern, Kilowog, Laira, Mogo Doesn’t Socialize, Abin Sure, and Emerald Knights which is the fight against Krona.

The voice actors do a good job, and anything with Nathan Fillion gets my approval.  Elisabeth Moss does a good job playing the slightly overwhelmed new recruit facing almost certain death.  Though as they say in the Corps, everyone dies.

This is not the best DCU movie they have released, but it is still worth a watch if you like the Green Lantern, or just want to lean more about the Green Lantern Universe.  DCU continues to turn out good work, and Warner Brothers continues to ignore it, but at least fans are getting to see good DC Hero films.  If you have an Amazon Prime account, this movie is free for streaming, so it is worth a look.