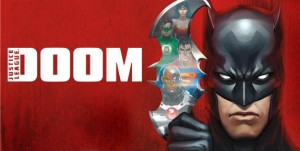 The Justice League: Doom is a animated straight to video movie that is based on the comic book story: JLA: Tower of Babel.  Much like a lot of other DC cartoon movies it is streaming on Netflix so I decided to give it a try.

Enemies of the Justice League are given the tools to defeat their foes by Vandal Savage, so he can carry out his nefarious master plan, and they form the Legion of Doom.  The Justice League characters featured are: Cyborg, Batman, Superman, Green Lantern, Martian Manhunter,  The Flash, and Wonder Woman.  For the Legion of Doom: Vandal Savage, Bain, Metallo, Star Sapphire, Ma’alefa’ak, Mirror Master, and Cheetah.

This was a pretty good movie.  It had plenty of action, and it used all the characters they selected well, but it was short, 77 minutes, so it never really developed a good story.  It was kind of like the Justice League was in trouble, and then not to spoil anything, but then they were better, and they substituted some of the major bad guys from the comic with some second tier ones. This may have been an effort to give those bad guys some screen time, but I will take Ra’s al Ghul over Vandal Savage any day.

I do have to say one thing about Wonder Woman in this movie, major spoilers, you can tell DC is doing anything they can to show how cool Wonder Woman is to launch her own movie or show, and she is cool, so the way they chose to almost kill her was to have Cheetah have nanobots on her claws that convince Wonder Woman that everyone she sees is Cheetah, so the plan to kill her is to have her keep on fighting until her heart gives out, so Wonder Woman’s major weakness is heart disease … well she is over 30.  End Spoilers.

Justice League: Doom was a good movie that could have been a great movie if they had taken their time to develop the plot a bit better, and had put in some higher profile bad guys.  DC has been doing a good job with these straight to video cartoons and I am sure I will watch more of them in future.

One Reply to “The Justice League is Doomed!”