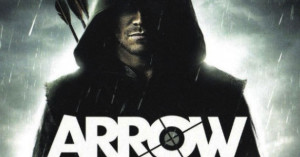 After being frustrated with DC a couple of days ago, I thought I would give their hit show Arrow a shot since the first season is now on Netflix.  I am glad I did.  The guys and gals over at CW have done a great job with character, and I can’t wait to see what they do next.

The show follows billionaire playboy Oliver Queen as he comes home from being stranded on an uncharted island that took the lives of one of his friends and his father.  He did not come home just to return to his family, but to clean up the city his father helped destroy.

If you think that sounds a little like Batman, you would be right, and that has not been lost on comic book fans for years now.  The big difference is that Green Arrow has always been a little more left leaning and will kill people from time to time.  There are some differences between the TV Green Arrow and the comic book Green Arrow.  For one thing they changed the name of the city to Starling from Star, and Speedy is his hard partying little sister not his side kick though that my be coming.  They also don’t call him the Green Arrow a lot, and if they do it is in jest.  Probably due to the awful Green Lantern movie, and they don’t want to confuse people.

Stephen Amell is a little stiff as the Arrow but being interesting as a brooding super hero is hard, but he is getting better as time goes on.  The rest of the cast is very good, and the middle aged cast is full of great industry genre vets like, John Barrowman (Jack Harkness), Paul Blackthorne (Harry Desden), and Colin Salmon (All sorts of stuff but Dr. Moon from Dr. Who).

There is a little of the CW random teenage drama thrown in here and there, but overall it is a great super hero TV show, so it is no wonder that they found success.  Plus they have been working in all sorts of cool DC villains and heroes, so it has been fun to see who shows up.  If these are people in charge of the new Flash and Hourman TV shows than we are in for a treat.