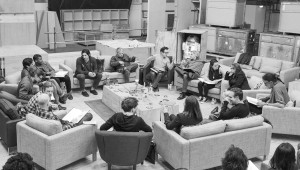 So the new kids are probably playing the children of Han and Leia, their friends, and the guy from Girls is probably an evil apprentice of some sort.  Max von Sydow is no doubt the bad guy because if he isn’t they have the world’s worst casting director.  This kind of leaves the amazing Andy Serkis as the wild card.  I am sure he will be an animated alien of some sort, but whether his is good or bad is anyone’s guess.  I am just happy he is in it because he makes everything better!  The only real surprise is that Billy Dee Williams (Lando Calrissian) wasn’t in the line up.  How can you have a Han without a Lando?  I am hoping that he shows up at some point to cheat Han out of the Falcon one more time.

Now that they have a cast the movie feels much more real.  It actually feels like it is moving forward.  J.J. Abrams has proven he can direct fun and exciting films, so I just hope the script is well written.  We only need to wait a year and a half for a new Star Wars movie!  I know the last three should have made me more cautious, but I can’t help it.  It makes me giddy just to think about sitting in a theater, watching the intro text scroll, and listening to an amazing John Williams score!

4 Replies to “Star Wars: Episode VII Has A Cast!”