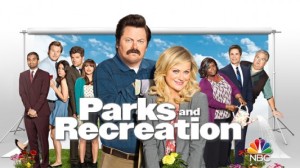 It has taken me awhile to get around to Parks and Rec Season Six, but too much stuff has happened this week for me to get to it in a timely manner.  Overall I found the whole of season six to be more of the same, but the finale was wonderful.  It packed in tons of guest stars while setting up season seven to be something special.

This season was all about change for the crew of Pawnee Parks and Rec.  Leslie is recalled from City Council, Chris and Ann become parents, Ron becomes a family man himself, Tom continues his entrepreneurial dreams, and Ben becomes the City Manager.  If the season was about change, the finale was about the characters getting everything they wanted, so I am guessing next season will be about whether they got what it takes to handle their success.

The finale changed everything for the show, so just as the show was getting a little repetitive for me, they found a way to get me excited for next season.  You know that Leslie will be able to make it all work, and that she will have her trademark excited smile on her face when she does.

2 Replies to “The End Has Come For Parks And Recreation Season 6!”