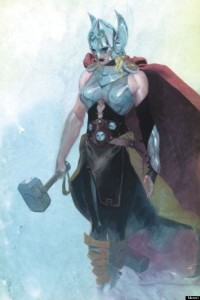 As you can see from the image above, and announced by The View yesterday, Thor is now a woman, or at least he will be a she in October when the new Thor #1 comes out.  The internet is reacting like this is biggest thing to ever happen, but I think it just makes sense.

Comic books have been a male dominated media for a long time, but lately that has started to change.  Whether that is due to the Marvel movies doing so well, or just the rise of geek culture in general, but whatever the reason Marvel wants to broaden their scope to get a few more readers, and a great way to do that is to make some more main line women heroes.  The got Captain Marvel, but they are need of a few more, so enter Thor.

Thor is the perfect character for this.  He is well known enough that it will be a big deal when he looses the hammer and a woman picks it up, but he is not so well loved that all the fanboys will cry and whine about how Marvel is messing with their favorite hero (though there is still some of that happening).  I personally don’t care as long as the comic books are good.  I mean Thor was a frog for a while and that was awesome, so a woman isn’t that big of a stretch.

I am curious how long this new lady Thor will last since it doesn’t sound like they are killing off the guy.  It is just that he is now unworthy to carry the hammer, but this new woman is worthy, so she is Thor.  I hope it lasts a long time because I think it will be a fun change to the Marvel universe.  Who knows maybe if it is successful we will see Pepper Potts put on the Iron Man suit.  Heaven knows she would be more reliable than Tony.