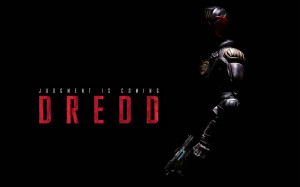 I have posted about Judge Dredd a lot on this site, and I have even told you to buy the DVD/Blu-Ray of the current film, not the Stallone version I wouldn’t wish that on my worst enemy, but I decided I hadn’t reviewed the movie myself, and after this I promise (fingers crossed) not to type about Dredd so much.

Dredd’s basic story is that Judge Dredd (Karl Urban) is forced to try out a new rookie Judge Anderson (Olivia Thirlby), and Judge Anderson decides to check out a triple homicide in the Peach Trees mega block, a two hundred story sky scrapper that houses seventy-eight thousand people, and while there they run in to the Ma-Ma (Lena Headey) Clan who locks the block down and the Judges are in for a fight for their lives.

I think why this movie works so well is that it keeps everything basic.  The story is simple: fight your way up the block and deal with Ma-Ma.  They could have thrown in an origin story or decided to create a Anderson and Dredd romance, but instead they kept is simple.  Dredd/Anderson vs. Ma-Ma Clan: Fight!  That may sound dull but it works. They keep the action exciting and don’t drift off in to things that don’t matter or make sence.  They also could have tried to make this movie an epic and had block vs. block warfare or something, but instead they made it a simple ride along and it works perfectly.

Unlike most movies Dredd doesn’t really change in this movie, he has no arc, it could be argued that he does a little at the end, but I don’t think so.  Anderson does change, she becomes more like Dredd understanding what needs to be done to keep this massive city (180,000,000 people) sort of under control.

The actors all play their parts well.  Urban who never takes Dredd’s helmet off really gives his jaw a work out.  His sneers and frowns are wonderful.  Thirlby does a great job playing a person that is way over her head, but is trying to cope, and when she finally understands what needs to be done, she hits just as hard as Dredd.  Headey plays Ma-Ma perfectly, she doesn’t care about anything except getting what she wants and is completely ruthless.

If you haven’t figured it out by now.  I loved this movie, and if you like action movies then you need to check this flick out.  If you don’t like violent movies then this probably isn’t for you, and if you don’t want to take my word for it you should check out Daniel’s review.

7 Replies to “It is Judgment Time!”