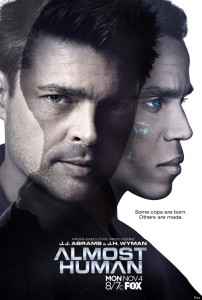 Almost Human is Fox’s new future Police Procedural produced by none other than the industry’s current mega media mogul J.J. Abrams.  The show is actually written and created by J.H. Wyman, but adding J.J.’s muscle made sure this show got made, and after the first episode I am glad that it did.

The show is about a cop John Kennex (Karl Urban) who was seriously injured during a police raid, and when he tries to return to the force he finds out that he needs an android partner.  In his case it is DRN or Dorian (Michael Ealy).  Dorian is not like the other androids because he was made to have feelings, this made his generation of robots glitchy, so they were discontinued and replaced by pure logic machines.

The first show is mostly world building, and an introduction to the surly John Kennex.  Urban plays him as a mix between Dredd and Bones, and it works very well.  Dorian we are still getting a feel for but Michael Ealy is likable, so I think it is going to work out just fine.  The leads are the whole reason I want to see more.  They are so good and so likable that even if the show was sub-par, I would watch it, but it looks like the show will be quite good.

The look for the show is like a cleaner Blade Runner which is cool, but it is a shame they couldn’t find their own aesthetic. It does keep them from having to explain the future setting.  Hopefully this will let them get in to abnormal crimes, instead of the usual Law and Order stuff.

I would watch Karl Urban in just about anything, so it is great to have him in his own weekly show.  I hope tonight’s show can keep up the good work.

One Reply to “I Am All For More Karl Urban In Almost Human!”