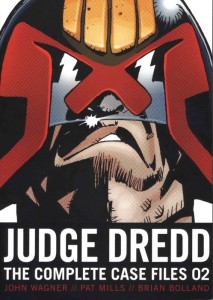 You should probably read my review of Judge Dredd The Complete Case Files 01 before reading this review, not that their are any spoilers, but because of the progression of the character.

Judge Dredd The Complete Case Files 02 is split up between to main stories, Judge Dredd’s journey over the cursed earth to deliver a medicine to cure a plague ravaging Mega City 2, and Judge Dredd leading the rebellion against the crazy Chief Judge Cal (short for Caligula).

The first story is great, and provides a lot of background in to the reasons for the Mega Cities.  The Cursed Earth is the irradiated landmass between the Mega Cities left after the nuclear war, and it is inhabited by crazy hillbillies, mutants, murderess crazy army robots, and a few dinosaurs left over from the cloned dinosaur park (the comic came out in 1977 and the book Jurassic Park came out in 1990, just saying).  It is great to see why everyone lives in the walled cities, but there are still some good people living in the wasteland and Dredd does his best to make the Cursed Earth a better place on the drive through.

The rebellion against Judge Cal is good, but gets a little long in the tooth towards the end.  Judge Cal takes over and is crazy and the people of Mega City 1 are paying the price, and only Judge Dredd and a few other loyal Judges can stop the mad man.

Unlike the first Complete Case Files, Judge Dredd is much more defined in this book.  He is more stoic with a dry sense of humor, and he upholds the law above all else.  The comedic relief Walter the Robot is not in this book as much considering Judge Dredd as a series has started to take a much more serious tone.  Not that it is all hard core action and carnage, there are still some laughs to be had but the humor is a little darker.

I liked this book much more then the first one, and I am sure that I will be buying more in the future.  Judge Dredd is a cool character and being able read through his history is has been fun.