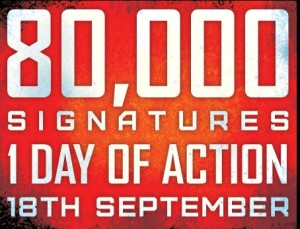 As many of you know, I really liked the recent Dredd movie staring Karl Urban, so when I heard that 2000 AD the comic book publisher that created Dredd had a petition to sign to try and urge the creators of the Dredd movie to make a sequel, I signed up.

Now the people running the petition have decided to do something kind of interesting, they are planning a “Day of Action”.  The plan is that on Wednesday September 18th to try and get people to buy the DVD/Blu-Ray, watch Dredd on iTunes/Netflix, or anything else that will drive the Dredd movie up charts, so that the movie is back in the public eye, and that the movie studio executives will see that there is money to be made off the Mega City One enforcer.

Usually these fanboy petitions do not amount to much, but by asking the fans to put their money where their mouth is it may actually gain some traction.  Obviously this is a little self serving for 2000 AD since I am sure they get some kind of royalties for every Dredd item sold, but still the only way that they will make a Dredd sequel is if there is money to be made, so it makes sense to have the fans show them that money exists.

Since I already own the Blu-Ray, I am not sure if I will be participating, but on the other hand the 18th may be a good day to buy some Blu-Ray sized stocking stuffers with an angry looking judge on the cover, you can never get your Christmas shopping done too early.

4 Replies to “Make a Dredd Sequel Day of Action!”