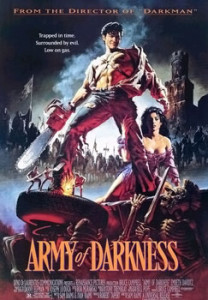 The Army of Darkness is the third film in the original The Evil Dead franchise.  It is Sam Raimi’s dark comedy send up to A Connecticut Yankee in King Author’s Court.  Is it as good as the classic Evil Dead II?  Yes it is.

The plot continues after Evil Dead II.  Ash defeats the Demon at the cabin then is sucked in to a worm hole and ends up in the past.  He then has to help the people of that time ward off The Evil Dead.

It is amazing how this franchise changed from movie to movie.  The first movie is a straight up horror movie, all be it a low budget one.  Then second one blends in humor with the horror, and Army of Darkness is a straight up dark zany comedy.  I hope that the new franchise follows this path because it is one of the better trilogies ever made.

Sam Raimi must love old school special effects because he uses them all in this movie:  stop motion, puppets, overlaying two sets of film, and almost any other technique you can think of, and it gives this movie a very old school swash buckling feel, and it is wonderful.

Bruce Campbell is his usual jerky hero, and he had perfected it by this movie, and plays it so well it was a shame they never made another sequel, as of yet that is.  The rest of the cast does their job well, but they are pretty much just reacting to the amazing Bruce Campbell.

Of the three movies Evil Dead 2 is still my favorite, but Army of Darkness is a close, close second.  It is also the reason I forced myself to sit through the new Evil Dead movie, so I could have a chance to see Bruce be Ash one more time.

6 Replies to “Bruce Campbell Vs The Army of Darkness!”