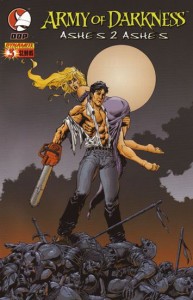 After watching the new Evil Dead movie and Army of Darkness recently I decided to give the comic book a try.  The first trade paper back in the series is Army of Darkness: Ashes 2 Ashes.  It is written by Andy Hartnell (Danger Girl), and illustrated by Sanford Greene (tons of DC stuff) and Nick Bradshaw who creates fan art, and because his art was of such high quality got the call to make this comic.

The comic book takes place directly after Army of Darkness with Ash just having just defeated the deadite woman at the S-Mart where he works.  He soon discovers the Wiseman from Army of Darkness in the toy aisle who informs Ash that because he did not say the words correctly that he has come back before the cabin in the woods even happened, so Ash rushes off to hopefully save his woman, and hopefully stave off the apocalypse.  As always the world is most certainly doomed.

The story works very well, and Andy Hartnell’s story is very funny.  I laughed out loud a couple of times while reading it.  Sam Raimi may not have to write a script for a new Army of Darkness movie because Hartnell’s book would work very well.

The art looks amazing, so hats off to Hartnell and Greene.  They made a very stylized version of Ash, but you know instantly who he is.