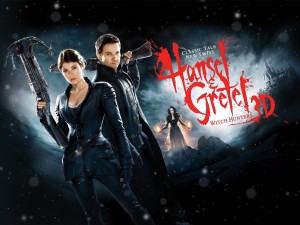 Hansel & Gretel: Witch Hunters is a 2013 film written and directed by Tommy Wirkola.  It is described as an Action Horror movie, but it is not very scary, and more so funny.  Really what it is, is low brow entertainment at its finest.

The story follows Hansel (Jeremy Renner) and Gretel (Gemma Arterton) from their early run in with the witch in the candy house.  To them becoming the titular bounty earning “Witch Hunters”.  They are called in to find missing children, and are soon dealing with some pretty dangerous witches.  The leader of whom is a grand witch name Muriel (Famke Janssen).

The plot is thin, but really it is just an excuse for a bunch of fun action scenes, and for Jeremy Renner and Gemma Arterton to quip one liners.  I also love that even though this is a period movie, they make no attempt to have the dialog or the weaponry match the times.  The makers of this film just decided to have a good time, so why bother trying to make a fantasy film historically accurate.

The fun the filmmakers are having really shines through.  You can tell that they were enjoying themselves coming up with new ways to kill witches in the most bloody ways possible, and for the most part they were very successful.  They make sure that you are well accustomed to the color red by the end of this film.

The actors also look like they are having fun in this film, especially the leads.  Renner and Arterton seem to relish kicking in skulls and playing with cool toys.  Famke Janssen is excellent at being bad.  She has that perfect evil glint in her eye, and she has a huge smile on her face when she gets to beat the stuffing out of the heroes.

If you come in to this film expecting something intellectual, you will be disappointed.  This is a dumb film that knows what it is, and it enjoys itself immensely.  If you are a fan of films like Army of Darkness, you should have fun watching this flick.  If not, this is probably not for you.