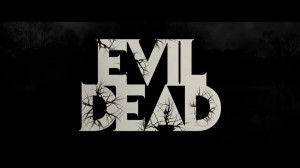 Evil Dead (2013) is the remake/sequel to the popular The Evil Dead (1981).  The Evil Dead spawned two sequels already, and they are thought to have created the genre of horror comedy, but this new movie goes back to the first film and is straight up horror.  This is the first movie in the franchise not to be written and directed by Sam Raimi, but by new comer Fred Alvarez who was hand picked by Raimi.  This movie was OK, but never lives up to the classic series that Raimi created.

The story is that five friends go up to a cabin in the woods to help a drug addict, Mia played by Jane Levy, kick he habit.  The friends agree that they will not let her leave until the worst of the withdrawals have subsided.  When they get in the cabin they soon find that it has been used for something weird.  There are a bunch of dead cats hanging in the basement, and a book wrapped in barbed wire.  Of course one of them reads the book out loud, even though the writing in the book says not too, and releases evil.

I like using the drug addiction as the reason they are up in the woods, because it makes it believable when the first person to see the random evil things happening is the drug addict, and the friends think she is either hallucinating or just trying to get them to let her leave, and Fred Alvarez knows how to shoot a horror scene.  Never flinching is showing the audience something awful, but the problem is that you only should do a remake if there is something add, or something that they couldn’t do before, but that is not the case here.  In The Evil Dead the violence was already ramped up to 11, so ramping it up to 12 wasn’t all that necessary.  The charm of the first movie (if horror movies have charm that is) was the movie was so low budget that it added a campiness to the whole thing.  In Evil Dead the only camp left is that cast makes every dumb choice possible, and they do make dumb choices.

Here are some guidelines for you if you are in a cabin in the woods.  If there are dead cats hanging in the cellar: leave.  If there is a book wrapped in barbed wire and bound in human flesh: do not read it, especially out loud, and if it tells you not to because something will eat your soul.  If something is chasing you, use the open door to the outside not the crack in the wall.

These is some good news though, and that is Sam Raimi has decided to make Army of Darkness II (The Evil Dead IV), and that means more Bruce Campbell Camping it up while killing the undead.  There is also a plan to have Mia and Bruce team up at a future point when they merge the two universes and that sounds like fun too, so if we have to have one OK horror movie for all that to happen, then so be it.

6 Replies to “Can you Survive the Evil Dead?”