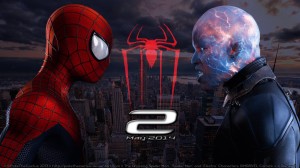 The first Amazing Spider-Man was surprisingly good since people had such low expectations for such a quick reboot to the franchise.  The Amazing Spider-Man 2 unfortunately takes a few steps back from its predecessor.  It is an unfocused mess, and it is a shame because there is a good movie in middle of all that mire.

The movie picks up directly after the first Amazing Spider-Man, with Peter Parker (Andrew Garfield) still madly in love with Gwen Stacy (Emma Stone), but Gwen’s father’s death is weighing on Peter and complicating their relationship.  To complicate matters further Peter is also trying to figure out what happened to his parents.  Meanwhile OsCorp is taking over New York’s power grid, and it is being worked on by the mild-mannered electrical engineer Max Dillon (Jamie Foxx).  Plus Harry Osborn(Dane DeHaan) returns to be with is ailing father.

The problem with this movie is that there are too many things going on at one time.  You got Peter and Gwen’s relationship, Peter looking in to his parents’ deaths, Max’s transition in to Electro, Harry dealing with his father’s death, and Harry becoming the Green Goblin.  There are five story lines right there, and I may have left some out.  This movie is two hours and twenty minutes long, and there still isn’t enough time to deal with all this stuff.

The actors do what they can, and Garfield and Stone really shine in this movie with great chemistry.  They bring life to Parker and Stacy, but they also get the most air time, so their story develops naturally.  Foxx and DeHaan are not given that luxury, so they have to play their parts way over the top giving the villains in this movie a very Batman Forever feel.  Which would be fine if the rest of the movie wasn’t so serious.  It is quite jarring.

They just should have left a few things out.  Parker doesn’t need to investigate his parents’ deaths.  He already has daddy issues thanks to Uncle Ben’s death, he doesn’t need more, and it doesn’t amount to anything.  We didn’t need the Green Goblin in this movie.  They could have saved that for the third one, and given DeHaan the time his character needed.  That extra screen time would have helped Foxx’s Electro out quite a bit.  Maybe at least he wouldn’t have come off so zany.

The special effects in this movie range from excellent to crappy.  Spider-Man zipping around New York is awe inspiring.  The finally battle between him and Electro looks like a bad video game.  With a budget as big as this movie had, it seems like they could have fixed it up quite a bit.

The Amazing Spider-Man set this series up for success.  Sadly the Amazing Spider-Man 2 wastes most of that potential.  There are parts of this movie that work and are really fun, but there is so much bloat that this movie just can’t keep its momentum.  This is not the worst Spider-Man movie (That is all you Spider-Man 3!), but it is close, and I hope that for Sony’s sake they can turn this franchise around.

3 Replies to “The Amazing Spider-Man 2 Is A Mess!”