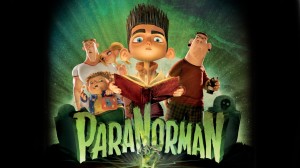 ParaNorman is one of three major stop motion animated films from 2012.  Made by Laika Animation Studio it was nominated for best animated film, and my buddy Daniel thought it should have won.  I think he was right.

Norman is a boy who can see ghosts, and unlike most people this doesn’t freak him out, but it does cause him to get bullied quite a bit, and makes him a loaner.  Things get worse for Norman as he starts having strange premonitions about zombies, and a crazy uncle that tells him he is the only one that can stop a witches curse.  This causes him to get bullied even more.  Thankfully a boy name Neil befriends him, and helps him with his troubles. It is not often a movie about zombies is so moving, but considering all the trouble our culture has with bullies, you really feel bad for the way Norman gets treated, and you are very happy for him when he comes in to his own and saves the day.

The stop motion is great, and Laika has improved since their last stop motion movie Coraline.  There are so few stop motion studio’s left it is good to see a new one doing so well.

If you are looking for a quirky film, with more charm and heart then most movies could dream of, then you should give ParaNorman a try.  I am sure you will be glad you did.

One Reply to “Investigate the ParaNorman”