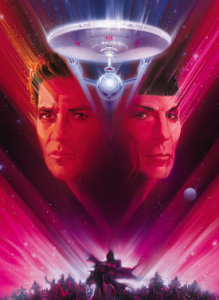 Star Trek V: The Final Frontier was made in 1989, 20 years after the end of the TV show.  It was so bad that it almost ended the Star Trek franchise.  This movie was directed by Captain Kirk himself William Shatner.  Shatner got a chance to redeem himself by directing the next movie.

The movie starts off on Nimbus III (think Tatooine).  A giant dirt hole that is supposed to be the planet of peace where The Klingons, The Federation, and The Romulans are supposed to work together to build the world, but of course they don’t and everyone just fights a lot.  A man named Sybok kidnaps the ambassadors from the three governments, and unless a ship is sent he will kill them.  Of course they send the Enterprise to help them.  Then Sybok steals the Enterprise and is off to the great barrier at the center of the galaxy to find God.

This movie has all sorts of problems: The plot is bad, the special effects are bad, the acting is bad, and the directing isn’t great.  They really just should have scrapped this one and called it a day

I am glad that in this movie they decided to go out and explore something, but it is so anticlimactic when they get there.  They build up the great barrier as some sort of impenetrable wall that nothing can get through, and then they just fly through it without any problem, and it is not just because the Enterprise is awesome because a Klingon Bird of Pray does the same thing like two minutes later.  Oh yeah there are Klingons in this movie for some reason, don’t worry they are pointless so you can forget about them.

This movie was the low point for the series for awhile, but sadly it gets worse in a few films.  If you haven’t guessed it by now, you should skip this movie.  Luckily the next movie isn’t that bad, so there is hope.