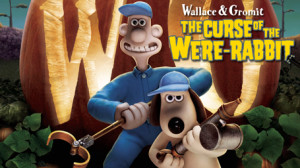 I was going to watch my favorite Halloween/Christmas movie The Nightmare Before Christmas while answering the door for Trick-or-Treaters, but HBO had other plans, and I watched Wallace & Gromit: The Curse of the Were-Rabbit.  Curse of the Were-Rabbit came out in 2005, and it was created by Aardman Animations, who is known of their Wallace and Gromit stories.  It was the second DreamWorks Animation distributed film to with the Academy Award for best Animated Feature Film.

If you don’t know, Wallace and Gromit are a pair of inventors who’s inventions always lead them in to hijinks.  And by them, I should say Wallace because he never ‘listens’ to his dog Gromit, who never speaks, when he is about to do something stupid.  This of course happens when they are tasked with guarding the town’s giant vegetables for the upcoming competition, and Wallace accidently creates the titular giant Were-rabbit.

This movie is incredibly British, so it is amazing that it won the Oscar that year.  The jokes are a bunch of wonderful puns and site gags, and since Gromit can’t talk they get to throw in quite a few silent movie era comedy pratfalls.  The story is simple, so it doesn’t get in the way of all the fun the animators and story tellers are obviously having.

This movie is stop-motion animated, so I would probably love it even if it wasn’t great, but it is so I can still recommend it to anyone who has a sense of humor.  It is a great movie for the kids at Halloween, and the adults will have just as much, if not more fun than the kids are having.