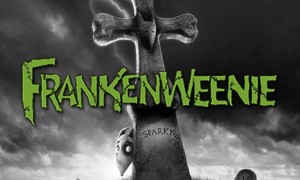 Frankenweenie is a stop motion animated film by Tim Burton.  It was one of three major stop motion pictures to come out in 2012, and all of which were nominated for the Best Animated Feature Oscar.  It is based off a short film with same name also directed by Tim Burton.

Frankenweenie is about a young Victor Frankenstein (Charlie Tahan) who’s dog Sparky gets hit by a car, and not wanting to be separated from his best friend does what all people named Frankenstein do and brings him back from the dead.  When his classmates hear about his feat, they try and outdo him in order to win the science fair.  The plot is simple, but really works.  Sparky is Victor’s best friend, and it is easy to sympathize with Victor’s loss.

You can tell Tim Burton loves stop motion because every character, and every set is lovingly created and animated.  He also gets to pay homage to all the classic horror characters from the golden age, Victor’s classmates look like, the psychic ghost girl, Frankenstein’s monster, Igor, and many others, so it is fun to pick them out.

They also kept this film from wearing out its welcome.  It comes in at almost exactly an hour and half, which is perfect for this sort of film.  The transfer on the Blu-Ray is great, and it looks amazing.  It is also a good movie to test your black levels on your Hi-Def TV, considering it is black and white it really does amazing things with shades of gray.

This isn’t my favorite animated movie from last year, but I still think it was better then Brave, but I think most films nominated were better then Brave.  If you want a short and sweet film to watch, then Frankenweenie may be your ticket.

One Reply to “Behold the Terror of Frankenweenie!”