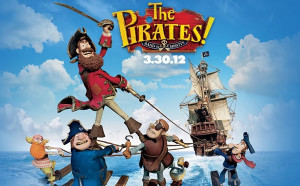 The Pirates! Band of Misfits (yes the exclamation point is part of the title) is a stop motion animation feature length film from Aardman Animations.  Aardman is known for their charming British humor, and they continue the trend with this film.

The movie starts as The Captain (Hugh Grant) tries and fails to be Pirate of the Year, but as luck would have it while plundering they capture Charles Darwin who informs The Captain that his parrot is in fact a dodo and that they could use it to win the Scientist of the Year award.  So they venture to pirate hating England to try and win the booty.

This movie isn’t especially deep it is mainly an exscuse to be silly, and silly it is.  It also does its best to charm you with its British wit.  I am a sucker for British wit, so I liked this movie quite a bit.  It is not a classic like Wallace and Gromit, but they do a good job, and with the short 88 minute run time there is no time to get bored.

I love stop motion animation, and Aardman is one of the last few companies still keeping this style going.  I hope they continue to make these movies so I can continue to go to them. When I was a kid it was one of my favorite “When I grow up” job choices, so any movie with stop motion gets bonus points.

This movie is a good silly time waster, being stop motion and British kind of makes me like it just because it exists.  But despite all that I think you should watch it too, because we all need somthing fun and light hearted once and a while.

3 Replies to “Watch out for The Pirates!”