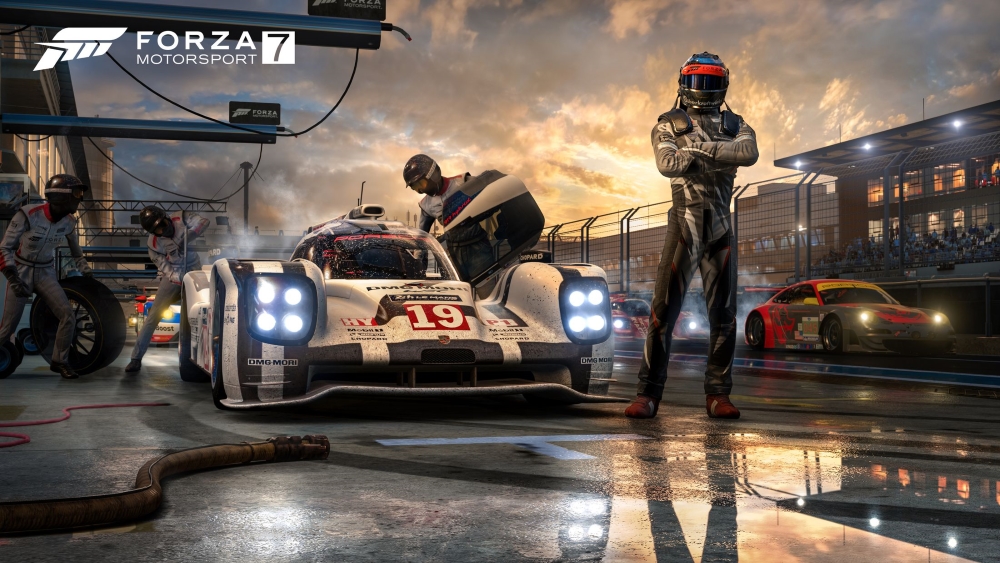 It has hard to find something new to say about the Forza Motorsport franchise.  It is Microsoft’s premier racing game, and it always looks gorgeous.  Even when you think it can’t look any better, they always find a way to amp up the visuals.  With Forza Motorsport 7, Turn 10 had some help because the Xbox One X came out and let them go crazy with the graphical fidelity.  Though there are some new things for standard Xbox One users, namely dynamic weather and greater freedom in race selection.

As for what Forza 7 offers, it has more of everything.  More cars, more tracks, more outfits, more weather variation, and more crazy car customization.  Seriously what guys can do with random squares and circles is crazy.  I think every popular anime character has been accounted for.  It is hard to argue with the package Turn 10 has put together, if you think it is missing something, I think you are looking for a completely different game.

All of that is great, but there is one flaw, the progression system, or I should say systems.  There are three.  SP is what you earn during different ‘cups’ or sections of the game.  For every race you earn SP, and if you race enough you earn that section’s cup.  Then you are off to the next section (if you want).  What is nice is that you can pick which races to do, with a good variety of car choices.  Not as flexible as Forza Horizon 3‘s any car you want, but pretty close.

The only problem is that some races are stuck behind a ‘Collector’ level.  You up your Collector level with every car you get.  Different cars have different values, so you will want to get cars that help up your Collector level the fastest.  The problem is that you are picking cars based off point value instead of, “That car is awesome! I want that one!”, but cars are stuck behind the Collector level too, so you will be getting low level cars at first (and lot of them) just to get that level up.   Also since you can buy car packs as DLC with real money that are then ‘free’ in the game.  It adds a pay to win element.

The third system is XP.  Get enough XP and you level up, but that doesn’t mean much anymore.  All it really does is give you more money and then let you choose from three other rewards: more money, a free or discounted car, or a new Drivatar outfit.  Obviously with the Collector system outlined above, you should always pick the car, unless you have the Car Pass and are already juicing your Collector level.

Next is everyone’s favorite system ‘Prize Crates’.  There are different ‘Prize Crates’.  Some crates have cards in them called ‘mods’ that usually give you more money for racing on harder difficulties, like turning off traction control, or turning off the Forza racing line and just having the braking line.  Other, more expensive crates, have cars in them, but since you are saving your money for cars that help your Collector level, they seem like a bad investment.  The mods on the other hand pay you back quickly thanks to their money modifiers.  For now you can’t buy these crates with real money, but the fear is that you will be able to eventually, adding yet another pay to win mechanic.  Though after the Battlefront II fiasco, maybe not.

All of this and I haven’t even got to the racing!  How is it? It is Forza, it is awesome.  Not as arcade-y as Horizon, but not the super hard sim of Grand Turismo either.  It is right in the middle somewhere.  With seven games out now all I can say is that Forza 7 plays like a Forza Motorsport game.  One that now has dynamic weather to mess you up.  Which is great.

I like Forza Motorsport 7.  It continues the progression of the franchise.  It is not a huge leap forward, but it looks and plays great.  It is just a shame the Collector level just sits there in the way.  If they got rid of that, it would be the open game fans have been wanting.  Still, if you like racing games, and you want something to show off your Xbox One X, it is worth picking up.