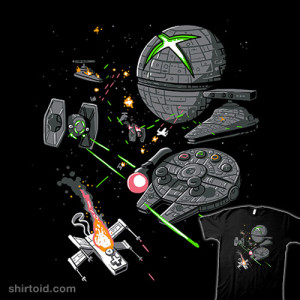 Image via shirtoid.com, and you can get it on a shirt!

As long as there has been more than one gaming platform, there has always been the argument that one reigns supreme over the others, but instead of discussing it like mature adults, we like to rage against one another on forums.  The sad fact is that now more than ever the platforms are very similar to one another, so all this rage is mostly meaningless.  Why is it that we can’t all just get along?

I think it all comes down to money.  Gaming can be an expensive hobby.  By the time people get the hardware, the peripherals, and the games, you can be several hundred dollars, if not thousands, in the hole.  A person just wants to feel justified in their purchase, so when someone makes a different choice then them it is like they are saying “you were wrong”.  Buying a console or PC is not a test.  There is no wrong answer.  Are you having fun on the platform you purchased? Yes?  Good you made the right choice.  That is all there is too it.  People are reading in to the current console hardware sales, and trying to use them to prove that one console is better than the other, but the console race will last for years to come.

Plus we do not really want a winner.  If there was only one platform, there would be no competition, so games would cost even more, and the lone console would be pretty crappy.  For those of you that are old enough, look what happened to the Atari.  The Atari 2600 came out, and it was the only game in town, so when they made a follow up, the 5200, it was a giant pile of dung.  It was so bad it almost destroyed video games, but luckily the Nintendo Entertainment System saved the day.

The new consoles are all selling well, and there is a resurgence in the PC market due to the rise in indie development.  We as gamers should all be happy about that.  As an Xbox One owner, I want the PS4 to do well, and as a PC owner, I want there to be strength in the console market.  We are all part of the same hobby, and it is something we enjoy greatly, so we should be happy for one another.  Though I am sure we can all agree that mobile gaming is the WORST! 😉