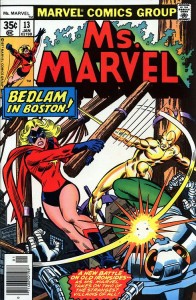 There was some big news yesterday as it was announced that Paul Bettany would be playing The Vision in the new Avengers movie.  Since Bettany already plays the voice of JARVIS (Tony Stark’s AI butler) in the in the Marvel Movie Universe, it seems to point to the fact that Tony Stark not Henry Pym (Ant Man) will create the evil android Ultron, and in return Ultron will use Stark’s loyal companion against him.  At least at first if they follow the comics at all.

While that is all very cool news, and interesting to think about.  People seem to missing the even bigger news as the Latino Review pointed out, they are casting for Ms. Marvel (though he says Miss Marvel)!  It is about time Marvel finally brought a top tier female crime fighter in to the mix.  As a matter of fact Ms. Marvel is probably more powerful than the rest of the Avengers combined, so this version of Ultron is going to be one bad dude.

I mean no disrespect to Scarlett Johansson, but the Black Widow would be as useful in a fight against Ultron as a guy with toothpick versus a bunch of samurai with katanas, so to have the Scarlet Witch (Elizabeth Olsen) and Ms. Marvel will let the ladies show up to the fight in force.  With the amount of firepower Marvel is packing in to this movie, Avengers: Age of Ultron may be the biggest movie of all time.

4 Replies to “We Are Finally Getting A Ms. Marvel!”