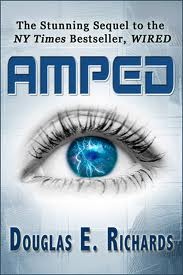 I read the book Wired not to long ago, and I liked it so much that I quickly read the follow up Amped.  I was less than impressed.  I wanted to like this book, but its forced plot and easy to spot twists ruin it.

The story continues to follow David Desh and Kira Miller as they lead a group of super smart scientists to solve the world’s problems.  However, people are still after them, and want their research for their own selfish gain, so Desh and Miller are on the run again.  Meanwhile humanity makes its greatest discovery of all time, but without the amped up minds that work for Desh and Miller can they hope to understand it?

The book’s main two protagonists are still very likable, and the thought of creating massively intelligent people is interesting, but this book just felt forced.  The tight plotting and action from the first book are gone, and instead it tries to focus on people thinking they are outsmarting each other.  Which would be fine if their plans were interesting.

It is a shame this book wasn’t as good as the first one, but at least I didn’t have to pay for it because it is free on the Kindle Lending Library.  If you need to waste some time, say on an airplane going to California, this book is passable, but it falls way short of its predecessor.

2 Replies to “Shmee Gets Less Than Amped”