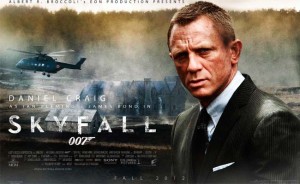 Skyfall is the 23rd James Bond film in 50 years, and the third staring Daniel Craig, and somehow they still made a good and engaging film.  They got to take their time with this film and it showed.

The premise is that MI6 is under attack by a cyber-terrorist (Javier Bardem), and James Bond has to stop him before he uncovers, and releases, all MI6’s secrets.  This movie also asks the question to whether Bond is necessary in these modern time when we can just snoop on people over the internet.

Sam Mendes takes Bond back to his roots while modernizing the franchise.  He only gives bond a couple of tech toys to play with, but it really forces the movie to be on whether Bond is up to the challenge or not, not whether he has the right tools for the job, and he shows the effect of the technology on the spy game, with the tracking and hacking, and all the information we have at our fingers now.  He also knows what is important: he makes sure the action and fight sequences hard hitting and exciting.

The actors all do their jobs well too. Daniel Craig has become Bond, and he is starting rival Sean Connery with his identifiability with the character.  Javier Bardem knows how to play a bad guy, and his ability to make you hate him is great, and Dame Judi Dench is wonderful in this movie as the keeper of the old guard at MI6.  A person who always puts the job first no matter what the sacrifice, and showing the wear and tear that has on a person.

It obvious why it this was the most successful Bond of all time.  It hits all the right notes and it has a story that is relevant to our time.  Sam Mendes is in talks to do the next Bond movie as well, here is hoping!