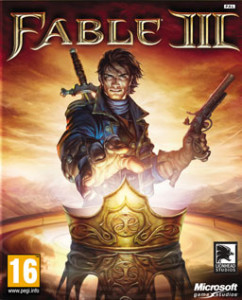 Having played both Fable and Fable II, I somehow totally missed out on Fable III when it came out in 2010, but thanks to Microsoft for giving it away during the end of June, I was able to rectify that.

The game takes place fifty years after Fable II, and your character has died leaving the oldest son, Logan you new character’s older brother, in charge.  He is an evil king and you decide to do something about it by leading the rebellion, and then becoming the king or queen in his stead, queen in my case.

The games core mechanics have not changed that much, you still hit X to swing your sword, Y to shoot your gun, and B to launch your magic attacks, and you can mix them up as you see fit.  Leveling up has changed, now you can open chests when you have gained enough followers to earn new skills and character interactions.  They also got rid of the start menu, now it is a room that lets you walk around and pick your options.

The game is kind of the same old Fable in the beginning with the same fight mechanics, and the same graphics, and even the same landscape.  It is still fun but feels very familiar, but once you become queen then all the fun comes in as you get to make choices that change the future of your kingdom.

Since the fist part of the game is the same as the other Fables it kind of drags in the beginning, but the game soon changes things up and gets much better, and since it was free I couldn’t have asked for a better price, but you can find it for around $10 on Amazon, and it is still worth it at that price.