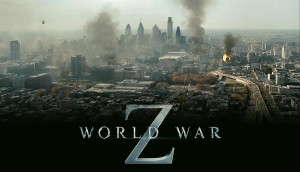 World War Z is a big budget zombie movie produced and stared in by Brad Pitt.  Before its release it was known for its exploding costs and script rewrites, and then the ending tested so poorly that they had to totally scrap it and film a new one at the last minute, but it seemed to turn out okay provided that you didn’t want a movie that resembled the book.

The story follows a former UN investigator Garry Lane (Brad Pitt) as he travels the globe looking for the cure to the zombie plague ravaging the world, so that the UN boat that is looking after his family doesn’t kick them off.

The plot is simple, but since it is a zombie movie that is to be expected.  The zombies in this movie are a mix between 28 Days Later and its PG13 sensibilities, so fast and scary looking but without being gruesome, unlike most of the creatures from their genre.  The special effects are good with the zombies looking the part, and the huge zombie waves attacking human strongholds are well done.

It is interesting that parts of this movie that work the best are not the large epic fights, but the close quarters with zombies hiding in the dark scenes, and while the large set pieces do add scope, they loose a lot of the tension.  There is nothing better than a person with their back against the wall trying to survive against these relentless foes.

I like this movie, and it says a lot about how the public feels about zombies these days that the market can sustain such a large scale project, but at the end the day the reason it works are the old school zombie scares.