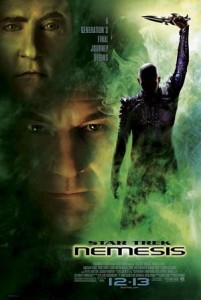 Star Trek: Nemesis came out in 2002 and was directed by Stuart Baird.  It was the first Star Trek film to be a total financial failure, so it was the last Star Trek movie to feature the Next Generation cast.  This movie tried hard, but it still wasn’t very good.

The plot is fairly nonsensical, but it goes something like this:  The Enterprise finds one of Data’s brothers, and then Romulans get taken over by their fellow solar system mates the Remans.  The Remans offer to make peace with the Federation, so they send for a ship and as it turns out the closest ship is the USS Enterprise-E.  Also the leader of the Remans is the clone of Captain Picard, and he probably doesn’t want peace after all.

There are a lot of problems with this story and it is full of holes, but I will give them that they tried to go deeper in to who Picard is by having him face his clone, and likewise Data by finding his primitive brother.  They also tried to make the movie a little more action packed then Insurrection, and I would rather them swing and miss like this than just recycling the show like they did in the previous movie.  I just think it could have used a few rewrites.

Another one of this movie’s problems is that Baird is not as good of a director as Jonathan Frakes, and I don’t think Insurrection was his fault, so the change did not make sense to me.

I don’t really need to talk about the acting at this point because they all just play the characters we know and love exactly like they always have, so if you were hoping for a change then this movie doesn’t have it.

This movie is not good, but it is way better than the feeble attempt that Insurrection was, and I think if you are a fan of the show or the movies then it is worth watching, but for casual fans, stay away.

2 Replies to “Star Trek was its own Nemesis!”