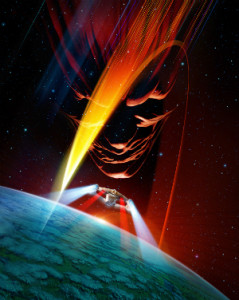 Star Trek: Insurrection is a 1998 film and the ninth Star Trek feature film.  It is the second film to use only the Next Generation cast, and it is directed by Jonathon Frakes.  Does it live up to the standard set buy First Contact?  It sadly does not.

The films starts out with Commander Data going crazy and attacking his fellow Star Fleet members while monitoring an apparently less developed race the Ba’Ku, and then holds the Star Fleet members captive.  Admiral Matthew Dougherty then calls Captain Picard for the Data’s schematics, so they can find a way to turn him off.  Picard thinks something sounds a little off and then goes to the Ba’Ku home world to investigate, and of course he finds that all is not as it seems.

The main problem with this movie is the plot.  It sounds kind of original when I condense it like that, but it is not.  This movie is like several episodes that Star Trek: The Next Generation has done before, and what is so depressing is that in the movie they discuss needing every new race available to join the Federation so they can defend against the Borg and the Dominion, and either of those bad guys would have made a better movie than this, but instead we get a recycled and forgettable script from the TV show. I suppose we should be thankful it is a better then average episode.

The cast continues to do their jobs well, and they know how to play their characters. One of the nice things about this story is that planet rejuvenates people, so they all get to act young and a little silly. Jonathan Frakes continues to be a steady hand behind the camera and proves that he is a good director.

I liked Star Trek: Insurrection more this time I watched it, but I think it is because I hadn’t watched the show in so long that watching a longer then average episode of Star Trek: TNG wasn’t as disappointing, but still it is a shame that they hit a home run with all the same people in their previous outing, and they go and follow it up with a bunt.

One Reply to “Star Trek stages an Insurrection”