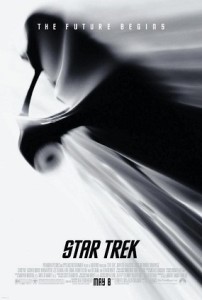 Star Trek is the 2009 reboot for the Star Trek series by J.J. Abrams.  This movie was the response to the bomb that was Star Trek: Nemesis.  It worked.  The movie made more than $385 million worldwide, making it the biggest film in the franchise, and Paramount responded by locking down the director and the actors for two more movies after it.

They cleverly made this movie in an alternate universe that Spock creates when trying to stop a super nova from destroying the galaxy, but not before it destroys the Romulan home world.  A Romulan Nero comes through the black hole that Spock makes and ends up coming to the past and kills Kirks father, and it forever alters time.  Kirk grows up a troubled child, but still ends up in Star Fleet Academy.  He is forced on to the Enterprise when Nero destroys the Volcan home world as retribution.  Kirk and the rest of the crew must stop him before he destroys Earth as well.

A lot of Star Trek Fans don’t like this movie because they made it too commercial and actiony, but I think they just focused on making a great film, and they did.  This movie is easily one of the better Star Trek movies ever made, and it is in my top three: First Contact, Wrath of Kahn, and Star Trek.

I loved how they focused on what makes Spock tick in this movie.  You get to see him from two points of view in this movie.  When he is young and brash, and when he is old and wise.  It was a very smart way to bridge the two universes, and it is just good to see Leonard Nimoy in anything.  They do also show how Kirk’s life was different, but not quite as drastically.

The new cast they got was great.  I think everybody did their jobs well, and they filled their storied rolls as best as could be hoped for, and I have to admit that lately I have kind of a man crush on Karl Urban.  He is in everything I like these days, Lord of the Rings, Star Trek, and Dredd for starters, so I hope he continues to do work that I approve of.

J.J. Abrams does a good job as director, and he shows us what a Star Trek movie should have been all the time, by showing us stuff they never could have done on a TV set.  Sure his lens flare does get a little annoying, but if it means good movies I can deal with it.

I hope they keep up the good work with Star Trek Into Darkness because it is good to have Star Trek around even if it has changed a little, but things have to change to survive.

One Reply to “Back to the Begining of Star Trek!”