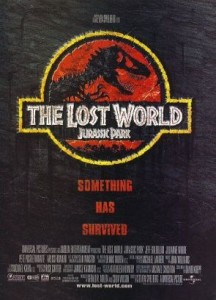 Having recently watched the rerelease of Jurassic Park on the IMAX, my wife and I have decided to watch its sequels as well.  The Lost World: Jurassic Park came out in 1997 and was directed by Stephen Spielberg.  It is not as good as its predecessor, but is still a lot of fun.

The movie starts with Ian Malcolm (Jeff Goldblum) being brought to John Hammond’s (Richard Attenborough) house to discuss something, and it turns out Hammond wants Malcolm to go to another island he owns that he cloned the dinosaurs on and help a team document them.  I am never quite sure why he wants a theoretical mathematician to document the dinos, but oh well someone we know has to go, but he can only be convinced to go once he knows his girlfriend Sarah Harding (Julianne Moore) is there already, so he goes to recue her, but then his daughter who wants some time with her dad sneaks on the boat and goes too.  Things go okay until people show up and try and capture the dinosaurs, and then things go decidedly unokay.

The plot is a little contrived, but it works and it is mostly believable.  Sadly a lot of the actors are not.  They have some good people in this movie, but it seems like they are all just showing up to collect their paychecks.  It is a shame too because without the wooden performances this movie could have been a lot better.

The special effects in this movie are good, but not as good as they were in the Jurassic Park.  They use a lot more computer animation in this movie and it is not for the better.  The first movie blended animatronics, puppets, and CG so well that it still holds up.  This one the animatronics look worse and so does the CG, and the movie suffers for it.

All that being said it is still a fun movie, and watching dinosaurs is always good time which why I will probably watch JP4 when it comes out next year.

4 Replies to “I Visit The Lost World: Jurassic Park”