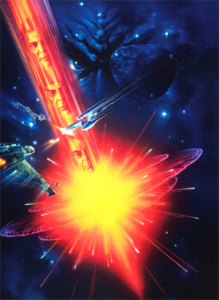 Star Trek VI: The Undiscovered Country came out in 1991, and is that last film featuring the complete original crew.  The sixth film was going to be a reboot of the franchise, but fans and the original cast wouldn’t let them.  Though as we know they would reboot the series with the 11th film.

The movie starts off with the crew of the USS Excelsior led by Captain Sulu being caught in an energy wave caused by the Klingon moon Praxis exploding.  This moon was the Klingon’s number one energy source.  With this information the crew of the soon to be decommissioned USS Enterprise are called into a top secret meeting and are told by Spock that the Klingons can no longer afford the cold war they have been having with the Federation, and need to create a lasting peace, so the Enterprise is sent out to guide a Klingon ship to Earth for peace hearings, and as you can guess things don’t go as planned.

After the disaster that was Star Trek V, this movie was an excellent way to send off the original cast.  It has a very Star Trek story about the galaxy becoming a better place through peace, and they get to show the audience something new: like the Klingon Home World, and a prison mining camp, and Kirk gets to be Kirk by fighting aliens and making out with alien ladies, so kudos to Leonard Nimoy for coming up with this story.

They had all sorts of fun with the casting by working Worf (Michael Dorn) and Christian Slater in to the movie, and one of the greatest Star Trek villains of all time Christopher Plumber as General Chang.  He like Khan loves to quote Shakespeare and blow stuff up.  It is wonderful.  I can only hope that they have Benedict Cumberbatch quoting Shakespeare in the new movie because that is what good Star Trek villains do.

For some reason I thought William Shatner directed this movie, but he did not.  Thankfully the director was Nicholas Meyer who also directed Wrath of Khan, and helped write The Voyage Home, so if you are thinking he was involved in all the good early Star Trek movies, you would be right, and it is a shame they didn’t just get him to do them all.

This is one of the few truly good Star Trek movies that is also just a good movie period.  If you want to watch a good movie with the original cast, watch this movie or Wrath of Khan, and I am sure you will have a good time.

3 Replies to “Star Trek Looks for The Undiscovered Country”