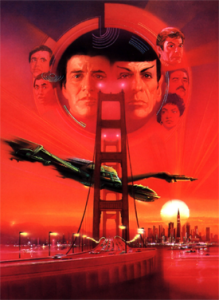 Star Trek IV: The Voyage Home is obviously the follow up to Star Trek III: The Search for Spock, and it is the first Star Trek movie that I remember coming out as a kid.  I was very excited when Dad brought home the VHS tape for us to watch.  It is also the completion of a three story arch that started with Star Trek II: The Wrath of Khan.  Is it as good as I remember? It is defiantly one of the better Star Trek movies.

This movie starts right where the last movie left off.  Spock is still trying to remember who he was and is, and the crew of the Enterprise is taking their stolen Klingon Bird of Prey home, so they can stand trial for disobeying orders and stealing the Enterprise, but on the way home a giant probe is threating the Earth and sending out some sort of strange sound.  When Spock hears it he recognizes it as humpback whale songs, but since they are extinct they cannot answer back, so the crew of the stolen Klingon vessel go back in time to get some.

Even though this is hardly the first giant thing to endanger the Earth in Star Trek, it is still a fun story, and seeing the crew as fish out of water in the 1980’s is pretty humorous.  The Voyage Home is one of the funniest Star Trek movies made.  Leonard Nimoy does a great job as the director of this movie, and gave Gene Rodenberry the time travel movie he wanted to make with the second movie, without the need to make sure JFK gets assassinated.

Star Trek IV: The Voyage Home is a good movie, and it is miles better then movies that are about to follow, unless I am remembering them wrong (I am not).  It is hard to believe that his movie is almost 30 years old, but then again I am almost 31 (sigh), but it holds up well.