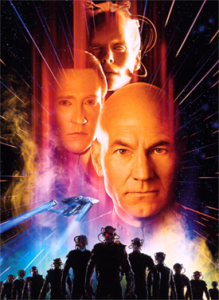 Star Trek: First Contact is the first movie in the franchise to only feature the Next Generation crew.  It is also the first feature film directed by Jonathan Frakes more commonly known as Commander William T. Riker.  How does the new crew do on their first solo voyage? Splendidly.

The movie starts off with Captain Picard dreaming about his time as a Borg which happened six years earlier.  He is then woken up by an Admiral explaining the new Borg threat.  He will not be assigned to deal with the threat because the Federation is worried his past will affect his actions.  Things do not go well for the Federation, so Picard takes the ship to deal with Borg anyway, and when they stop the Borg Cube a Borg Ball ship shoots out from the Borg Cube and travels in to the past.  The Enterprise must follow it to save our future.

It sounds like a confusing plot, but it is actually pretty easy to follow, and works quite well.  The Borg are my favorite Star Trek enemy, so to have a movie where they are the bad guys is excellent, and it allows Picard to deal with his feelings about the Borg captivity from the show.  Their leader the Borg Queen is played excellently by Alice Krige.  She gives the Borg a little life and attitude.  The rest of the cast all know their characters, and play them well.

The special effects and sets for the most part work very well.  My only critique is that the human camp they have to help in the past looks like a good Sci-Fi TV set not an A-List movie set, but it is a minor flaw in an otherwise great movie, but it seems like something they could have worked on a little bit.

This was always my favorite Star Trek movie.  It had the Next Generation cast, and it featured a good story with a lot of action and a great villain, and while she may not quote Shakespeare like other villains, she is still quite memorable.  Star Trek: First Contact is on the sadly very short list of truly good Star Trek movies.