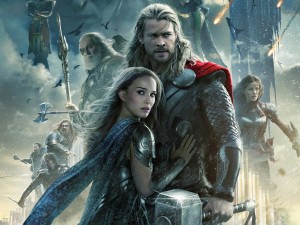 Thor: The Dark World is the sequel to 2011’s Thor, but it follows the events of The Avengers.  All the major stars return, but this time it is directed by Alan Taylor who is most well known for directing several Game Thrones episodes, so fantasy is well within his wheelhouse.  This movie is not perfect, but it is very good.

The Dark Elves who ruled the universe before time began, have returned because Jane Foster (Natalie Portman) has found their ancient weapon the Aether.  Thor (Chris Hemsworth), who was busy bringing peace to the galaxy, must reunite with Jane to stop the threat.  In other words, it is very similar to the plot of the first Thor movie, but don’t worry the story really doesn’t matter.

I say the story doesn’t matter because they infused this movie with both a darker theme and lighter and wittier dialog, so it really makes this movie feel more important while making sure you know that the characters still have a sense of humor, and it might actually be fun to be super hero.  Joss Whedon’s fingerprints are all over this movie, and while he may not have written it or in been charge of it, everyone is doing their best follow the model he made with The Avengers.

Chris Hemsworth and Tom Hiddleston (Loki) are pitch perfect in this movie.  This is their third time around as the gods of Asgard, and they know their parts inside and out.  They really make us all believe that all the craziness going on around them is reality.  The rest of the cast is fine and do their parts well, but this movie is all about the brothers, and they are fantastic!

Yes the story is unfortunately bland, but everything else about this movie is great.  I have no problems recommending this movie, and I am sure that you will have good time in theater.  Also just an FYI, be sure to stick around after the credits because there are two scenes not just one, and they are not to be missed. Let’s see if they can keep up the good work in Captain America: The Winter Soldier!

2 Replies to “Shmee Enters The Dark World With Thor!”