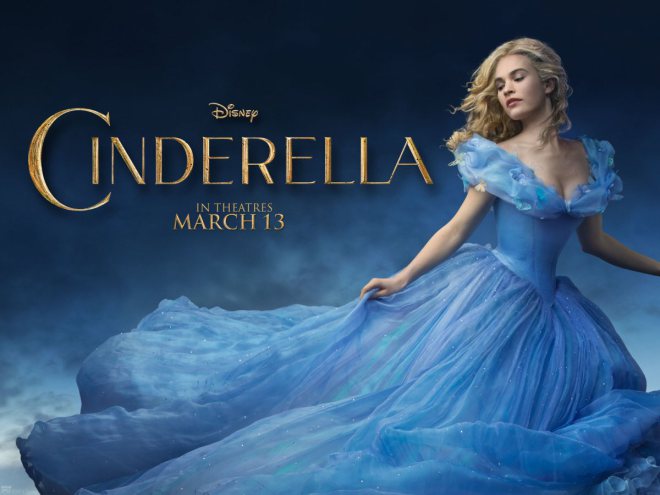 Cinderella, the 2015 film by Kenneth Branagh (Thor), is Disney’s best live action remake of one of their classic cartoons yet.  It provides most of the magic and wonder of the original, but gives us greater context for all the characters’ motivations, and I think Cinderella out of all the old Disney films always needed the most context.

Unlike Disney’s other live action re-imaginings, if you have seen the cartoon you know how this movie plays out.  The orphan Ella (Lily James) is forced in to servitude by her step-mother Lady Tremaine (Cate Blanchett), but she is rescued by her Fairy Godmother (Helena Bonham Carter) who dolls her up and sends her to the ball where she meets the Prince (Richard Madden), and after a few shoe fittings later she lives happily ever after.

What is different about this movie is that they answer a few of the questions we have had for a long time: Why didn’t Cinderella run away?  Why is Lady Tremaine so cruel? Why is the Prince so willing to marry someone he just met, and why is Cinderella always talking to animals?  The answers to these questions aren’t always super convincing, and I am not sure they tell the whole story, but they at least make the movie much more relatable.  With the added context it makes this sugary sweet story go down much smoother.

The actors are all great.  James plays the sweet and caring Ella so well.  You really feel for all the hardships she goes through, but like almost all Disney movies the villain steals the show.  Cate Blanchett both vamps it up and plays Tremaine with a bit of vulnerability.  Blanchett makes the character without a doubt evil, but believably so.  As far as the rest of the cast goes, they all turn in their limited parts quite well.  There wasn’t a bad performance in the bunch.

Kenneth Branagh brings his mastery of filming period pieces to this film.  The whole world, while being slightly over the top, felt real and worn in.  It is still cotton-candy for the eyes, but It just works.  Disney’s costume crew also worked their magic on this movie.  Everything looked perfect.  The step-sisters’ dresses looked both hideous and amazing at the same time, and Blanchett’s dresses and gowns were perfect.  Cinderella’s ball gown and wedding dress were very lovely.  They are going to be selling a lot of dolls to a lot of little girls.

The only major downside of this film was that even with the added story elements, it was still the same Cinderella that we have seen for years.  Just a well done version, but even with that said there is a reason classic stories stick around.  We like to see kind and good people get what they deserve, and likewise we love to see the schemes of the evil fail.  This movie delivers on that.  If you have a kid and are looking for a movie to watch Cinderella is a great option (though currently it is pretty much your only option), or if you are just like me and love Disney, it is still a must watch.