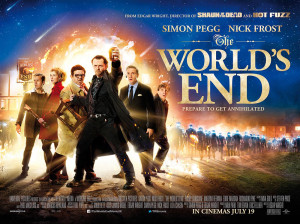 The World’s End is a film by Edgar Wright with a lot if input from the actors Simon Pegg and Nick Frost, and it is the third film in the Cornetto Trilogy.  The first two are Shaun of the Dead and Hot Fuzz.  While all three films are different, they all make fun of Wright, Pegg, and Frost’s favorite genres, so Shaun of the Dead is horror, Hot Fuzz is the police action film, and that leaves The World’s End to be the Sci-Fi disaster movie.

The film is about Gary King (Simon Pegg) who has never gotten past his glory days in high school, and his favorite memory from high school is when he and his mates tried to drink the Golden Mile in their old home town.  The Golden Mile consists of twelve pubs, and the last one is The World’s End.  Back in high school they did not complete the mile, so now the much older gang has got back together to try again, but after a strange confrontation in a bathroom with some young local thugs, the night turns out much different than they planned.

This movie is much different than I expected, sure there is dry rapid fire British humor which is excellent, but this film also has a lot more depth to it, and it is probably the most introspective of the Cornetto Trilogy.  This film really dives in to the psyche of Gary King, and why the Golden Mile is so important to him.  It is a nice change from the out right zaniness of Hot Fuzz, though in Hot Fuzz’s defense it is the funnier film.

Gary King is brought to life by the brilliant Simon Pegg, and even though he is an unlikable character, you still root for him thanks to Pegg’s charm.  The rest of the gang does great work too never missing a beat.  Martin Freeman seems like he is in everything these days, and since he is such a good actor I have no problems with that at all.

If you can’t tell by now, I really liked The World’s End, and it makes me sad that Cornetto only has three flavors because I could use a few more, but if there had to be only three than I am glad all three are so good!

**I saw this with my buddy Daniel, and you can see his opinion here!