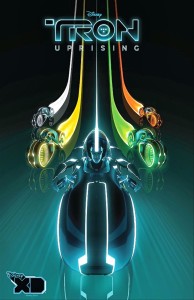 Tron: Uprising was a show on Disney XD for the Summer of 2012, and it has since landed on Netflix.  Since I love all things Tron I had to try it out and watch it, and I am glad I did since it may be the best entry into the Tron franchise.

The show is about a young program named Beck (Elijah Wood) trying to lead a revolution by taking Tron’s name against the local occupation while being instructed by Tron (Bruce Boxleitner) himself.  He has good friends to help him along the way Mara (Mandy Moore) and Zed (Nathan Corddry), and some other old Tron characters may show up along the way.  This series serves as a way to bridge the gap between Tron and Tron: Legacy.

Elijah Wood’s performance nails the young program trying to be more then he is, and anything with the real Tron Bruce Boxleitner in it is awesome.  The rest of the cast do their jobs well, but the show really hinges on Tron and Beck, so it is good that they cast them so well.

The look they created for the show is great.  They took the aesthetic from Tron: Legacy and then stylized it even more, so the show is full of deep blacks with cool neon accents.  There is a ton of action in this show with Disc fights, and light cycle/jet/ATV chases, and it seems like they have a new way to frame it every time so it doesn’t get old.

I really like this show, so it stands to reason that its future is uncertain.  It did not get the viewership ratings to justify a second season, but Disney knows it has a good thing going so they haven’t officially canceled it, and they are looking for somewhere else to put it, but even if it does get canceled at least we got these nineteen episodes.

5 Replies to “Join Shmee for the Tron Uprising!”