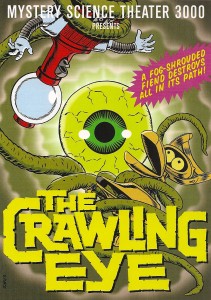 Another day another MST3K movie to review, and this week I have duesy.  The Crawling Eye!  This is an older MST3K episode from when they adlibbed the jokes, so sometimes they aren’t the greatest, but the movie is so delightfully bad that you can make up your own jokes.

This movie takes place in a small town near Geneva where the local mountain the Trollenberg has been covered in fog and people have been going missing, or ending up beheaded when they try and climb the mountain.  It turns out that the fog is a localized atmosphere so these eye like alien creatures can breathe and I guess eat people’s heads, so don’t climb the Trollenberg.  But people keep climbing it and dying, and it turns out this has happened before in the Alps, so I guess we should have known better, but that would be boring movie.

This is one of those movies where everything is the right kind of bad: cheesy acting, horrible special effects, and an awful script, but they keep up the pace so it doesn’t get boring.  It is a shame that some of the jokes from Joel and the Bots don’t land, but this is before they hired TV’s Frank, so they were down a writer.

If you are by yourself this movie may not be as fun to watch since you will have to make up your own jokes, and you will have no one to tell them too so you will be talking to yourself, but if you are like me then that is a common occurrence anyway, so it was a fun movie to watch.