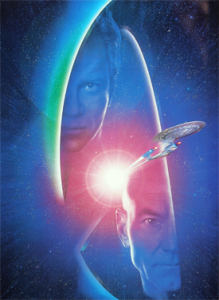 Star Trek Generations is the seventh film in the Star Trek franchise, and it serves as the hand off between the original Star Trek cast, and the Next Generation cast.  Some say it is the best odd numbered Star Trek movie, and that is probably true, but it is a bit of faint praise.

The film starts out with Kirk, Scotty, and Chekov taking a tour of the new U.S.S. Enterprise B.  They are on board as a publicity stunt to send off the new ship and take it on its maiden voyage around Pluto and back home, but as soon as they are underway they get a distress call from a couple of ships that are stuck in an energy ribbon.  Kirk saves the people on one of the ships and the Enterprise, but gets zapped by the ribbon in the process.  Two of the people they save are our villain Soran (Malcolm McDowell), and Guinan.  It turns out the energy ribbon is a place of pure joy, and Soran was not happy to leave.  Zoom ahead to the Next Generation, and we find that out Soran (he like Guinan lives for hundreds of years) will do anything to get back in to the ribbon even kill two-hundred million people.  This story proves to be the weakest part of the movie.

With this movie I could see that they thought they needed a movie that would bridge the two series together, but they didn’t if it means we have to have a story like this.  It is one of those stories that seems okay when you watch it, but it gets worse when you think about it.  For instance they say you cannot just fly a ship in to the ribbon, but that is how Kirk gets there, and they say you never want to leave the ribbon and all you will ever do is think about how you want to stay there, but Kirk and Picard do just leave when they decide it is not real enough, so it turns out this movie could have been skipped if Soran had decided just to take a ship to the ribbon and teleport himself in to it, but killing two-hundred million people by collapsing stars is more fun.

Everything else about the movie is fine.  The special effects are good and the actors all know their roles backwards and forwards by now, so they all do a great job.  It is just a shame they weren’t given something good to do.

I was surprised by this movie because I remember it being awful, but instead it is just mediocre, and brought down by a bad plot, but it does pave the way for one of my favorite movies (not just Star Trek movies): Star Trek First Contact.