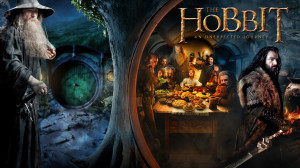 Thanks to my HBO Go, I got to stream one of the bigger movies of last year The Hobbit: An Unexpected Journey.  I of course saw this movie when it came out in theaters last year, but I thought it would be a good time to revisit it due to the impending release of The Hobbit: The Desolation of Smaug.  The film was once again directed by Peter Jackson and produced by New Line Cinema and MGM.

The Story follows a younger Bilbo Baggins (Martin Freeman) from the Lord of the Rings as he is roped in to an adventure by Gandalf the Gray (Ian McKellen).  He is trying to help thirteen dwarves lead by Thorin (Richard Armitage) take back their ancient home land The Lonely Mountain.

Tolkien purists are hard on this film because it differs from the book a lot.  They also add in a lot of things from the appendices and other works like The Lost Tales to try and pad the running time.  I quite liked the changes because it fleshes out the movie and gives it all more context.  After seeing the trailer for the new movie , I can tell that they added bunch to it as well.

The story is weakest part of this movie because it doesn’t stand on its own.  We all know that it will be continued this Christmas, but it doesn’t help this movie.  It is three hours long, and lot of things happen, but nothing really amounts to anything.  That may sound harsh, but it is true.  Luckily for us it gets better from there.

The actors are all fantastic, especially the three leads.  Freeman, McKellen, Armitage all breath life in to their characters and play off one another well.  The rest of the cast do what they can with their characters given their much smaller amount of screen time, and they all work great together.

The special effects are wonderful.  From the dark caves to the valley of Rivendell.  It all looks fantastic.  Some have complained that it looks a little too cartoony in places, but I think it works well with the lighter storyline of The Hobbit.  I also like all the random touches that must have been added by Guillermo del Toro.  Like the little goblin that sends messages, or the piece of ax stuck in a dwarf’s head.

It may not be The Hobbit we read as kids, but it is a good interpretiation of it, and bringing in all the random side information makes the story more complete.  Once we get the whole story that is.  This movie suffers from not telling us enough, but I am sure it will be a great part of a whole once the third film rolls.

One Reply to “Take An Unexpected Journey With The Hobbit!”