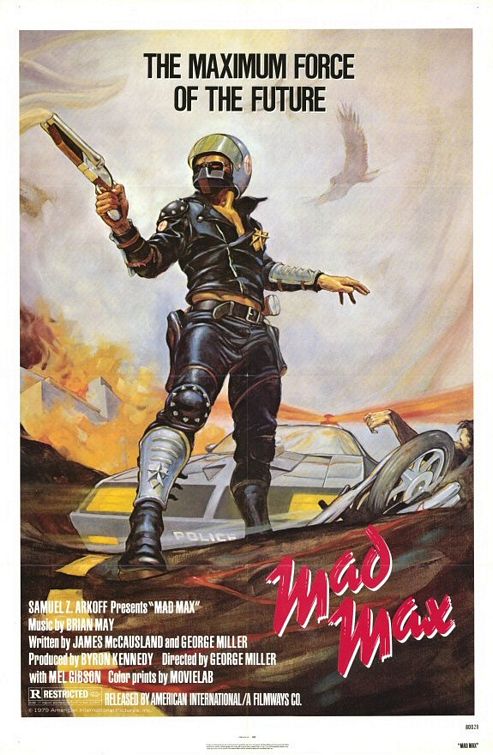 With Mad Max: Fury Road coming out this year there was only one thing to do: re-watch all of George Miller’s Mad Max films.  Since I watched them all as a kid on Cable TV it is amazing how different they are then I remembered them.  The first movie Mad Max was especially different than I remember it.  I am guessing that is because they could show so little of it on TV that it was super boring, and Mad Max is anything but boring.

The film is about a cop Max Rockatansky (Mel Gibson) in the near future.   His job is to try and keep the peace in a world spinning out of control as it runs out of oil.  Crazy motorcycle gangs threaten everyone’s security, even Max’s family.  It is up to Max and his V8 Interceptor to bring these gangs to justice!

When I envision Mad Max I always think of wastelands, rolling sand, crazy cars, and, people in football pads.  That is not this movie.  There are glimpses of that vision in this movie, but this movie is set on the coast of Australia in quaint little towns.  Really not that different than now, and that is what makes this movie almost scary.  It is hard to watch people go crazy and do awful things in what could be current day.  It is haunting.  It is not ‘fun’ like Mad Max’s two sequels.

The acting in this film is all pretty poor.  It is fine since this movie is mostly about high speed chases and crazy people being terrible to the populous, so good acting isn’t super necessary.  You can tell that Mel Gibson was going to be a star though.  He just had better screen presence than the rest of the cast.

Like I said this movie is all about the high speed chases, and the stunt work in this film is great.  With the budget for this movie being so low, I am not sure how safe all the stunt work was, but they did a good job, and George Miller managed to get it all on camera.  Not bad for a first time director.

Mad Max is not the film I thought it was, that movie is Mad Max 2: The Road Warrior  which I will review shortly no doubt, but I am glad that I revisited this film, so I could see Mad Max the way it was meant to be seen.  Not just like forty-five minutes of it on cable.  It was a solid first outing for all involved, and it launched an enduring franchise.

2 Replies to “Hangin’ Out With Mad Max!”