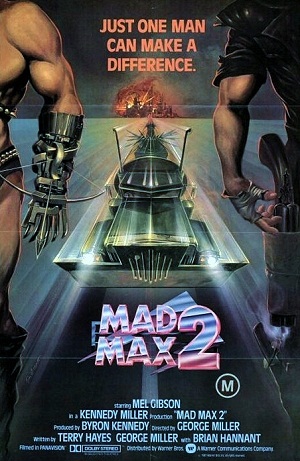 Mad Max 2: The Road Warrior is the movie that made Mad Max an icon.  As Stefon from Saturday Night Live would say it has everything:  A bodybuilder in a studded cup and a hockey mask, people tied to crazy cars, a gyrocopter, a kid in fur that only speaks in grunts and kills people with a boomerang, and a man with a dog looking for a little juice.  George Miller went all out when me made this film, and it is fantastic.

The movie takes place five years after the events of Mad Max, and the world has continued to spiral out of control.  There is almost no gas left, and people are killing each other for it.  Mad Max must team up with a gyrocopter captain to try and help a group pumping one of the last known oil reserves, but can they get the gas out before The Humongous and his gang take it all by force?

Oh man this movie.  It is so strange, and that is why it works so well.  With the original Mad Max it was too close to what we would expect today, but with The Road Warrior it is completely its own universe, and its own style.  A style so iconic that almost every post apocalyptic movie steals from it.  This movie and Blade Runner pretty much set the tone for every movie about the future.  It was also brilliant that they kept the story so simple.  There are bad guys attacking good guys, and then at the end they chase each other.  It is great, and it lets you take in all the weirdness without getting distracted by some silly story.

As far as acting goes it was all pretty bad, but Mel Gibson came a long way from the first movie, and he was really cementing himself as an action star.  Every one else though?  They just had sneer well, and for the most part they do their jobs, but there is a reason Gibson is pretty much the only person you know from this movie.

The stunt work is spectacular in this film.  It was good in Mad Max, but it is fantastic in Mad Max 2.  The final chase scene is one of the best ever put to film.  It is one of those achievements that you wish they would give a special Oscar to, but that is never going to happen.  Which one of the many reasons the Oscars are so flawed.

If you want to see the movie that defined the post apocalyptic genre, you need to watch Mad Max 2: The Road Warrior.  Since they recap the first movie at the start of it you don’t even need to see Mad Max.  That was very nice of them.  I really liked this movie, and I hope Mad Max: Fury Road is more like this movie, and less like the other two because if so we are in for a treat.

One Reply to “Getting Dusty With The Road Warrior!”