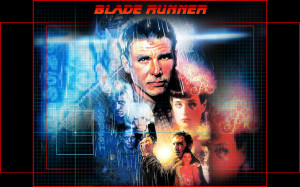 Blade Runner is the landmark 1982 Sci-Fi film by Ridley Scott.  This movie has always been a source of conflict for me because it has things I like in a movie, a realistic dystopian future, a film noir atmosphere, and Harrison Ford at the top of his career, but I didn’t like it the first time I saw it, but since it is held in such high regard, and the Blu-Ray was five dollars on Amazon, I decided to give it another try.

The film is about a special type of police officer a Blade Runner that hunts down and ‘retires’ (kills) replicated human type beings (Replicants).  This is because the Replicants had rebelled against their creators and thus banished from Earth.  Harrison Ford plays Richard Decker a Blade Runner that has been enlisted to find four Replicants that have come to Earth to try and find the key to live past their four year lifespans.

Despite the Sci-Fi trappings, this is really just a Film Noir Detective Movie from the 1940s but made in the 1980’s, and that is probably why I didn’t like it the first time I watched it because these type of movies take their time to set the mood, drink a lot of whiskey, and be generally unhappy, and in my youth I didn’t have the patience for such things, but this time I was much more contented to let the movie suck me in. Like many good detective films this movie doesn’t answer all the questions it asks, and the people in the movie are no better off when the movie ends than when it started.

The best part of this movie is by far the set and production design: the always dark and rainy LA with the over crowding and neon Asian signs.  It just seems like a real place, and you can tell why this movie set the look for so many films and shows that followed.  Firefly and the new Total Recall to name a couple.  Between this movie and Alien Ridley Scott cemented his place as one of Sci-Fi’s greatest film makers.

3 Replies to “I Give Blade Runner a Second Chance”